For the villager whose Japanese and Korean name is Petunia, see Azalea.

Petunia is a snooty cow villager in the Animal Crossing series. She appears in every first-generation Animal Crossing game. Her catchphrase, "moo la la," is a pun on the phrase "ooh la la" (from the French "oh là là").

Petunia in Doubutsu no Mori.

Petunia is a purple cow with a slightly darker purple spot over her left eye. She has a little bit of brown hair on the top of her head and golden horns and hooves. Petunia also has light blue eyeshadow and black mascara.

Petunia is a snooty villager, so she tends to be snobby, but can be nice occasionally depending on her relationship with the player. She will worry about her physical appearance and sense of style, usually relying on other villagers, including the player, to compliment her appearance. She will not get on well with lazy and jock villagers, who have conflicting lifestyles with her own - lazy do not worry so much about their appearance or fashion statements, and jock villagers often subtly criticize other villager's fitness, both of which are the main concerns of the snooty personality. 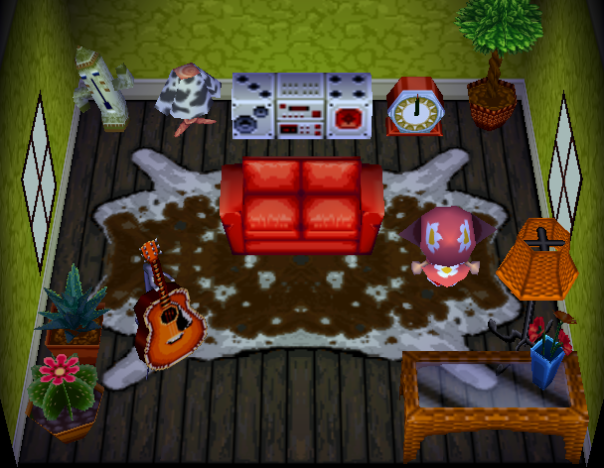 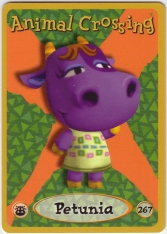 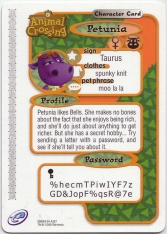