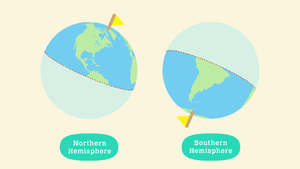 A graphic of the two hemispheres

A comparison of the seasons in the two hemispheres

The players choice of hemisphere affects various aspects of gameplay, most notably the seasons. For example, when it is summer in the northern hemisphere, it is winter in the southern hemisphere. This in turn changes other elements such as the appearance rates of bugs, fish, and sea creatures. Events and holidays may also vary and have unique dialogue specific for that hemisphere, but they are not tied with the season and can appear in both hemispheres. Turkey Day, for instance, may have fall roots, but is also available in spring for the southern hemisphere. Mystery Island tours, Harv's Island, and the May Day tour are also affected by the choice of hemisphere as those islands will correspond to the respective season that the main island is currently in.

There is also the unique availability of ornaments. While most of the seasonal materials are tied to the seasons respectively, ornaments ignore the hemisphere rules and are available in both hemispheres from December 15 to January 6. Both hemispheres gain cedar trees with bright lights, and if shaken will drop Red, Blue, and Gold Ornaments.