Harv's Island is a location in Animal Crossing: New Horizons where Harvey lives. On this island is Photopia, a building where the player is able to set up shots and take photos with characters.

To unlock the island, the player needs to speak to Harvey when he visits on roughly the third day of island living. He tells the player that he owns his own island and invites them to visit. The island can be accessed for free from the airport. After the player arrives for the first time, Harvey showcases Photopia to them and gives a tutorial on how to use it.

An example of a photo shoot involving a player and the ten villagers living on their island.

Photopia is the building located on Harv's Island where players can set up photo shoots. The player is able to access items they have unlocked in the Nook Shopping catalog and configure indoor scenes with the intent to stage photos. The player can place furniture, change the wallpaper and flooring, and invite the villagers currently living on their island. Using any Animal Crossing amiibo cards and amiibo figures enables the player to summon the rest of the New Horizons cast of villagers and special characters. In addition, the invited characters can be dressed up and can express Reactions the player has unlocked on cue. To capture a photo, the player uses the Camera app on their NookPhone.

After the player returns to their island, posters of any characters whose amiibo were scanned will become available for purchase from Nook Shopping.

An example of a photo taken during Wedding Season

Introduced in the 1.2.0 April Free Update, Wedding Season is an event that takes place at Photopia during the month of June. During the event the player is tasked with taking photos of Cyrus and Reese for their wedding anniversary in exchange for Heart Crystals. Each day Reese will ask for the room to be decorated in a different theme, and after each photo shoot the player can talk to Cyrus to exchange Heart Crystals for wedding-themed items, including items from the Wedding Series. 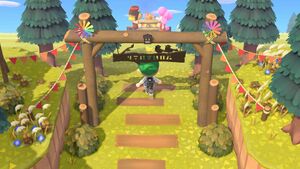 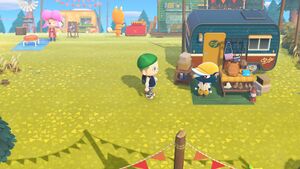 Harriet, Leif, Redd, and Kicks at the open-air market on Harv's Island in New Horizons

Beginning in the 2.0 Free Update, once the player's island reaches a 3-star rating and K.K. Slider plays his first concert, Harvey expands his island with the help of Harriet to have an open-air market. In addition to Harriet, who can give the player haircuts, the open-air market features seven pop-up shops run by special characters. Each shop must reach a funding goal of 100,000 Bells, paid to Lloid, after which it will open the following day.

The items Kicks, Leif, and Saharah sell change every Monday, while Redd changes his inventory daily. Their shop will be closed when they are present on the player's island.

Additionally, an ABD appears on Harv's Island once the open-air market is opened.

Although Harv's Island does not appear as a location in Animal Crossing: Pocket Camp, Photopia appears as a special furniture item known as Harvey's Wood Cabin, where upon crafting it with