Balloon Island is a minigame in Animal Crossing: amiibo Festival. Unlike all other minigames, it requires no Happy Tickets to unlock. It can be played with one to four players. 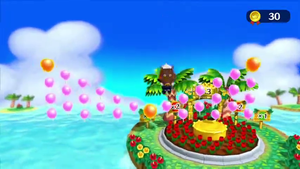 Gameplay of Balloon Island. The player is dropping Joan, who is scanned from her amiibo card, onto the moving island.

One to four players appear in boats around an island. The players take turns scanning an amiibo card to drop a character on the island while it is moving, with the objective being to have the character pop as many balloons as possible. There are two types of balloons: small, pink balloons which give one point when popped, and larger, orange balloons which give three points when popped. Depending on where the character lands, there is a different score multiplier: landing directly in the center gives a 3× multiplier, landing near the center gives a 2× multiplier, landing on the perimeter gives a 1× multiplier, and landing in the water rewards no points.