Acorn Chase is a minigame in Animal Crossing: amiibo Festival. It costs three Happy Tickets to unlock. It can be played with one player. 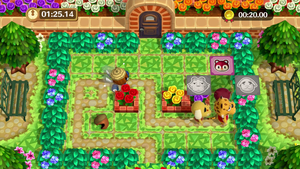 The player must scan three amiibo cards. The three characters whose cards are scanned appear outside a garden and encounter a cart that resembles Cornimer; they run away from the cart and run into the garden. The player must scan the characters' respective amiibo cards to move them through the garden, collecting acorns while avoiding the cart, which chases them. If the player collects all of the acorns, a key will appear in front of the door at the back of the garden; collecting the key and entering the door moves the player to the next round. There are three rounds in total, with each having more acorns and a larger play area. The game ends either when the player finishes the third round, one of the villagers gets hit by the cart, or the time runs out. Completing the minigame rewards the player with 130 Happy Points.