Snowboys (known as snowmen prior to New Leaf) are snowfolk in the Animal Crossing series. They can be built by the player by rolling two snowballs together. If built perfectly, they will give the player unique winter-themed items. 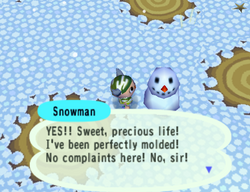 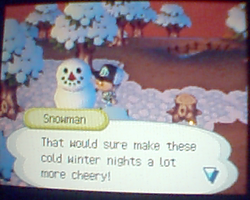 A player talking to a snowman in Wild World. 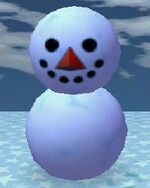 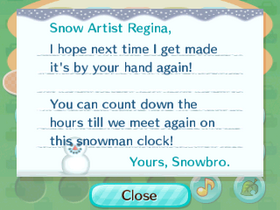 In Animal Crossing: New Leaf, snowmen are now known as Snowboys, and alongside them are three new snowpeople: Snowmam, Snowman, and Snowtyke. Snowboys can be built from December 11 to February 25, and, like in previous games, Snowboys will mail the player an item from the Snowman Series if built perfectly. An imperfectly built Snowboy will comment that the player is so close to perfection, while a poorly built one will poke fun at the player for building him that way. A Snowboy has the same voice as a lazy villager.

Snowboys, as well as all other snowpeople, do not appear in dreams and cannot be called with a megaphone. 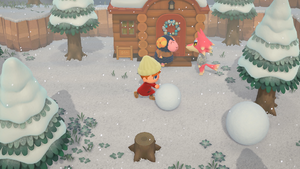 Snowboys return in Animal Crossing: New Horizons and are mostly identical to their previous appearances. When perfectly built, they give the player DIY recipes for items in the Frozen Series and a large snowflake, or just a large snowflake if all the DIY recipes have been obtained. However, the first Snowboy that the player builds will give out a DIY recipe whether he is perfectly made or not. The player can also collect one Large Snowflake from each perfect Snowboy per day. Snowboys last for four days before completely melting.

In Animal Crossing: Pocket Camp, snowfall snowman is a special furniture that was available from December 26, 2019 to January 10, 2020. This furniture is obtainable by crafting and costs

350 Leaf Tickets. When interacted with, it produces various dialogue spoken by the snowman.