While initially absent from Animal Crossing: New Horizons, the sea urchin was added in the 1.3.0 Free Summer Update in July 2020.

In August 2020, it became available as a limited-time item in Animal Crossing: Pocket Camp, where it is categorized as a shell rather than a sea creature.

"I got a sea urchin! And I didn't poke myself, either!"

In New Horizons, a sea urchin is used as an ingredient in the fish meunière dish on Turkey Day in the southern hemisphere.

"I got a sea urchin! Wasn't even 'earchin for it."

Icon for the Sea Urchin in Pocket Camp

The sea urchin appears as a shell in Animal Crossing: Pocket Camp and was available to collect for a limited time as part of the Sandy Shellfish Goals event, from August 20 to August 23, 2020. During the event, the shell would appear on the beach at Saltwater Shores, where it could be picked up. After the event, remaining Sea Urchins can stay in the player's inventory, where they can still be sold, used for animal requests, or listed in the player's Market Box. The sell price for this shell is

500 Bells. For villager requests, it is part of rarity tier 1, which earns the player

Upon donating a sea urchin to the museum, it can be found in the large pool in the first room of the Sea exhibit, along with many other species of sea creature. It is found in the part of the pool closer to the entrance to the saltwater exhibit. The exhibit has this to say about the sea urchin:

"Sea urchins are a close relative of both starfish and sea cucumbers and are assumed to be stationary. In actuality, they are capable of walking thanks to their many skinny legs they have between their spikes. They feed on seaweed on the ocean floor using their strong mouths located on their undersides. They are rich in nutrients but also have a lot of cholesterol, so take care not to eat too much."

"Ah, the sea urchin...the unabashed goth of the ocean floor! Indeed, with its mane of dark-hued spikes, it looks for all the world as if it might front a punk-rock band. Perhaps its more demure relatives—the sea cucumber and the sea star—disapprove of its outlandish look? 'Twould certainly explain why sea stars gobble up sea urchins every chance they get! But worry not for our spiky friend. Its venomous spines are an effective deterrent to many a predator. And then there are its sticky "tube feet," which it uses to maneuver out of harm's way. TUBE feet, I say! What will this salty rebel think of next?"

The sea urchin can then be found in the icy tank in the back, alongside the sea butterfly.

During a Fishing Tourney, when given a sea urchin, Chip will not score the sea creature but will say the following:

"When it comes to sea urchins, you can use 'em for sashimi or sushi, but whatever you do, keep 'em raw! Me, I like them fresh out of the water! Just watch for the spines, and you're good as gravy! YUM!" 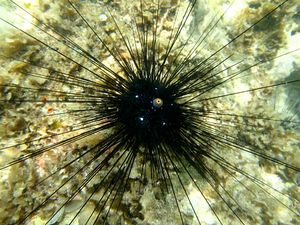 Urchins typically range in size from 3 to 10 cm (1 to 4 in), although the largest species can reach up to 36 cm (14 in). They have a rigid, usually spherical body bearing moveable spines, which gives the class the name Echinoidea (from the Greek ekhinos, spine). The name "urchin" is an old word for hedgehog, which sea urchins resemble; they have archaically been called sea hedgehogs. The name is derived from Old French herichun, from Latin ericius, hedgehog.

Like other echinoderms, sea urchin early larvae have bilateral symmetry, but they develop five-fold symmetry as they mature. This is most apparent in the "regular" sea urchins, which have roughly spherical bodies with five equally sized parts radiating out from their central axes. The mouth is at the base of the animal; the lower surface is described as "oral" and the upper surface as "aboral".