In July 2019 it became available in Animal Crossing: Pocket Camp, where it is categorized as a shell rather than a sea creature. It was first available for a limited time only, but has since become available as a regular shell and is part of the current cycle of shells as of November 2020.

While initially absent from Animal Crossing: New Horizons, the sea star was added in the 1.3.0 Free Summer Update.

"I got a sea star! Is a group called a constellation?"

Icon for the Sea Star in Pocket Camp

The sea star appears as a shell in Animal Crossing: Pocket Camp, and was first available for only a limited time as part of the Summer Sea Stars Goals event, from July 8 to July 11, 2019. It has since become available as a regular shell and is part of the current cycle of shells as of November 2020. The shell appears on the beach at Saltwater Shores, where it can be picked up. The sell price for this shell is

10 Bells. For villager requests, it is part of rarity tier 1, which earns the player

"I got a sea star! Maybe it'll give me an autograph!"

After being donated to the museum, the sea star can be found in the large pool in the first room of the sea exhibit, along with many other species of sea creatures. It is found in the section of the pool closest to the entrance. The exhibit says this about the Sea Star:

"These star-shaped creatures have hundreds of tiny feet attached to their mobile arms. This allows them to slowly walk and open shellfish for food, making them effective predators. If an arm gets caught and ripped off by another predator, the sea star's arm will just grow back. Some sea stars eat by extending their stomachs out of their mouths to trap and then digest prey."

When donating to the museum Blathers will say the following:

"The sea star may appear to have five feet...but those are, in fact, its arms. And though five-armed sea stars are the most common, there are species with 20 or even 40 arms out there! Ah, but the fascinating appendage facts do not end there, wot wot! You see, upon each sea star's arm sprout many dozens of tiny feet. Yes, FEET! They use these suction-cupped feet not just to move about...but to...eh...grab hold of dinner guests as well. Finally, it should be noted that when a sea star loses an arm, it can grow it back. More impressive yet, a severed sea star arm...can sometimes grow an entire sea star body back!"

During a Fishing Tourney, when given a sea star, Chip will not score the sea creature but will say the following:

"Now sea stars—people say you shouldn't eat these guys. Not tasty, apparently! Quite a harsh critique! Yeah, I think I'll listen to common opinion just this once. I'm not quite crazy enough to eat a sea star!" 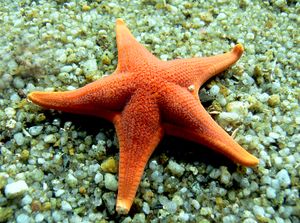 Sea stars are marine invertebrates. They typically have a central disc and usually five arms, though some species have a larger number of arms. The aboral or upper surface may be smooth, granular or spiny, and is covered with overlapping plates. Many species are brightly colored in various shades of red or orange, while others are blue, gray, or brown. Starfish have tube feet operated by a hydraulic system and a mouth at the centre of the oral or lower surface. Most can regenerate damaged parts or lost arms and they can shed arms as a means of defense.