"I got a manila clam! Manila is my favorite flavor of clam!"
— Player, Animal Crossing: New Horizons

Manila clams are an crafting material and cooking ingredient in Animal Crossing: New Horizons. It is also used as an ingredient for Franklin to cook the clam chowder dish on Turkey Day.

Manila clams can be obtained by digging up small dark spots that occasionally spurt water on the beach with a shovel. The first time the player retrieves one, they will learn a recipe to make fish bait, which requires a manila clam to craft. The player is rewarded for finding the clams via the Clam and Collected Nook Miles goals.

The manila clam is used as a crafting material and cooking ingredient in the DIY and cooking recipes for the following items: 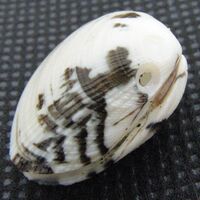 Manila clams, Lajonkairia lajonkairii, are a species of edible saltwater clams belonging to the Veneridae family, or venus clams. They are known to be variable in color and patterning, and range from a width of 40 to 57 millimeters. Manila clams live in shallow waters buried underneath sand, mud, or gravel.

Manila clams are native to the coastal regions of Pakistan, India, China, Japan, Korea, the Kuril Islands, and the Philippines (hence their name "manila clam" originating from the capital city of the Philippines, Manila). It has since spread to other regions including North America and Europe. They are commercially harvested around the world due to their wide distribution.