Good job with the edits. You have been given the trustee status to make patrolling edits easier. You aren't given extra responsibilities as a staff member, but it's just to show that we believe your edits don't require patrolling. Thanks!

Not sure about it? Nah, I've looked at your edits, and they're all good. That's what counts, and consider that a little thank you for contributing to Nookipedia. You're welcome! :)

You can't change the server time, because it's just that, the server's time. It's unified for all users for consistency. You can, however, change your signature by going to Special:Preferences. And I'd like to thank you as well for your help with this! --Jake 21:01, August 21, 2015 (EDT)

Thanks for the info and my plessure! (I'll go try it out right now!) ~ Heidy.Isabel

Thanks for your efforts, guys. I'm sorry I wasn't there during the attack. :/

Do you have any interest in becoming a staff member? You have been here for quite a while and have made lots of good, reliable edits. Adding to that, you have also helped fight vandalism effectively. Me or someone else will be happy to nominate you! Thanks for your contributions so far. Red (snappity snap snap!)

Me? A staff member? OF COURSE! I would love to be at least a patroller. Honestly, I was thinking about it for a while, but I wasn't sure when the time would be right. So, sure, nominate me for patroller. Thanks! :D Heidy.isabel (talk) 14:06, September 19, 2015 (EDT)

I've put your application up - wishing you the best of luck! Red (snappity snap snap!)

Sorry for any delay we've caused. I've promoted you to patroller! Congratulations! Welcome to our team! If you have any questions on how to use certain tools and all, don't be afraid to ask me or any other fellow staff members! :)

Hmmm...strange! I got it to work by placing {{User:Heidy Isabel/sig}} on a page. Try using that instead of ~~~~. Red (snappity snap snap!)

Okay it's working now. Thanks for the help! Heidy Isabel

It's really common for someone to pronounce my name like that. I'm actually surprised when someone gets it right the first time Dx Heidy Isabel 02:19, November 21, 2015 (EDT)

I honestly don't know what Kiba games is... (I do have a miiverse, though)

I have Rory in my town, and yesterday he asked me if he could move out. I remember you saying you wanted him, so I wanted hi to move out. Except I thought that the move out option was first, so I accidentally hit "don't go." I don't know how soon he will ask that again, but rest assured, when he does move out, you can have him! If so, Rory will have an exciting ride. I got him from trading also.

K. I'm like you, I really can love any villager I get, but Ribbot is an awesome one for me. Rory is not going to Reddit, where I trade villagers alot.

So you'll trade Rory for Ribbot, correct? (Ribbot is definitely 0% original. His shirt, phrase, and house is different, but nothing bad.)Heidy Isabel 23:34, November 27, 2015 (EDT)

Do you watch wow wow wubbzy?

As a young kid, I used to. I even went on their website and played the games there. Ahh, times were good.

Did you know that they took the games and videos off the Nick Jr site?

You can still play the games on other websites, like Starsue.net.

Just for further notice, this is the way you should maek the title of amiibo Card images:

So for Isabelle's Japanese card, it would be File:001 Isabelle amiibo Card JP.png. Got it?

Oh, by the way, if you look at Nintendo of Europe's amiibo card website, they have all of the European Series 2 cards up. I'll start uploading after I finish renaming. I'm starting at Poncho's EU (uploaded on Nov. 9), so you can do the ones before that if you wish.

On your user page:

"I would put a link to Miiverse, but a vandal got me banned"

How did a vandal get you banned?

I'm on vacation, but I guess I could answer one more question. So here's the story: Someone posted their friend code. I warned them that friend codes were prohibited on Miiverse. Apparently, just because of that, they false reported me so much that the admins decided to ban me for two weeks. :/ Heidy Isabel 04:14, December 23, 2015 (EST)

Do you relate to this?(I made it on Imgflip) 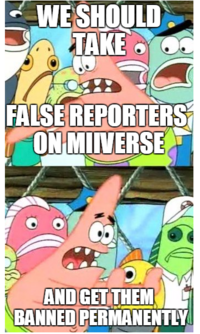 I saw that you deleted the talk page for that vandalized page, but you missed the actual article itself. Can you delete it, please?

Rory will be in boxes on January 6th. Ready for trade at about 3PM-4PM EST.

Good day, bad timing, though. I'm three hours before EST, so basically for me it would be 12PM-1PM, which is schooltime. A good time would be anything after 5:30PMish for your time. Or do I have to risk bringing my 3DS, which I really don't want to, and there's almost no way to do that. But other than that, don't worry about Ribbot; I know a trick to get him in boxes quick. Heidy Isabel 20:26, January 2, 2016 (EDT)

That should work, but if not, I'm really sorry. I'll let you know then. Also, do you have any idea why on Template:Nookiversary, my signature is broken?

Howdy Heidy! Just a quick thing, I'll be home tomorrow (sinus infection), so I was wondering if there was any time between 6AM-9AM EST that worked for you, but I doubt it, because that would be way too early. I may be able to do it up to 11AM EST. I prefer to do it in the morning just incase I will have to go to school on Thursday. Also, I figured out why my sig wasn't working, so forget about it.

I might be able to do that time, depending on how much time I got on me. If not, I don't think it will be a problem to trade later. After all, I already got Ribbot to ping so he'll be in boxes tomorrow. See ya tomorrow! Heidy Isabel 05:09, January 5, 2016 (EDT)

Oh, Ribbot is tomorrow? Good, I was hoping for the weekend, but I've kind of been a burden this entire time, so I'll take what I can get.

I know that TTing back a day technically is sending it forward a day, but if you get let me get Ribbot, and I TT back to when Rory was in boxes, do you think it could work? I feel really bad. I will be ready sometime between 5:30-7:30PM EST.

Unfortunately, once their house is gone, they're gone forever (unless you cycle 16 other villagers). However, Ribbot is still in boxes. The reason for this is because before playing New Leaf, I set the 3DS system's date to the time he was in boxes. He's up for grabs today. I'll be ready at about 7PM EST. Heidy Isabel 22:37, January 7, 2016 (EDT)

Im on cell again, so if I come over to get Ribbot and you will have 9 villagers if I set my 3DD date to Jan. 6 Rory will be back?

Rory isnt there! He was there before!

I'd really recommend checking the Villager Trade reddit. That's how I got Rory in the first place. You never know when your gonna find a trade. Also I see you figured out how to use the ~~~~ to get your signature template {{User:Heidy Isabel/sig}}, like I did!

Have you ever looked at my Happy Home designer houses?

Thanks for reverting vandalism yet again. That IP has been blocked for a week.

Which brings me to another point: you've been doing great work on the wiki since becoming a patroller, both with image uploads and vandalism fighting. I'd like to nominate you for the Administrator position if you approve; it must surely be frustrating that you can rollback edits, but can't block the vandals, no? I look forward to hearing from you, and thanks again! Red (talk)

I honestly don´t know if I should consider being an admin yet. I´ve only been around since late May of last year, and there aren´t that many patrollers here. I don´t really mind reverting vandalism, since it gives me something to do. I´m not quite sure about this, gimme a couple of days to think about it... Heidy Isabel 12:59, January 21, 2016 (EST)

Absolutely fine! :) There's no need to be forced into anything - adminship is a completely optional process. I just thought you were struggling with the vandals, that was all. Again, no worries! Red (talk)

I tried creating my own user page, but it´s not letting me. Help? (P.S. I think I know you from school xD)

Heidy Isabel isn't online, so I'll answer this instead. You need to be autoconfirmed to create pages - that means you need to be here for a week and make 10 edits. Sorry about that, but unfortunately page creation for non-autoconfirmed editors had to be turned off a few weeks ago due to persistent vandalism from new accounts. Red (talk)

But they told me to!

P.S. Why can only autoconfirmed users make their user page? I was able to make my user page when I first joined. Did they change it?

Red Snapper said this is changed due to persisent vandalism over a few weeks. Refer to the section above. (Also, it's usually not allowed to do anything on other user's pages, but I'll let it slide.) Heidy Isabel 23:27, February 3, 2016 (EST)

Go to the forums and look under 'Recent Status Updates.' SuperHamster explains it there. Red (talk)

When did they change and when is going to wear off?

It changed around December 30th, 2015. There's no set date when it will wear off; just when the directors decide that page creation is allowed again. The admins are discussing this right now due to the inconvenience caused to new users. Red (talk)

Where are they discussing it?

On the staff forums (Bulletin Boards). Unfortunately, you don't have the permissions to view the discussion since you're not staff - sorry! Red (talk)

Hello - hope you're doing well! Due to inactivity, you've been demoted from the Nookipedia staff (your last edit being back in May 2016). If you ever read this and would like to re-join the staff, though, just let a bureaucrat know! Thanks! Drago (talk)