This page or section contains instructions which may result in unexpected in-game effects.
Please proceed with caution when following directions from this page, and be aware that saving the game can make undesired effects permanent. Nookipedia is not responsible for any damage that may occur to games as a result of this information.

This page or section contains instructions which may result in unexpected in-game effects.
Please proceed with caution when following directions from this page, and be aware that saving the game can make undesired effects permanent. Nookipedia is not responsible for any damage that may occur to games as a result of this information.

Gameplay modification, or hacking, in the Animal Crossing series involves the manipulation of gameplay in a way other than permitted in a game's original programming. By using codes and following some other methods, hackers can perform a variety of things to play around with the game, including, but not limited to: 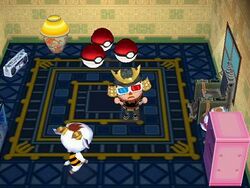 The TriPokeBall HDLC in City Folk, inspired by the Poké Ball.

Hacked distributed items, sometimes shortened to HDLC, are distributed items that are not created by Nintendo. They are usually created with the help of a cheating device, such as an Action Replay. At random times, the player will find them in the Able Sisters, if they have visited a hacker's town or a hacker visited their town.

The villager modifier is a cheat code used with devices such as the Action Replay in Animal Crossing: Wild World. It is used to change a villager in order to get rid of an undesired one, bring back one that has moved away, or have new villagers move to the town. However, the code cannot alter their personality, something that may lead to problems such as a female villager with a male personality.

This cheat code can change a villager's name, their character model, their house's color, their default catchphrase (unless it had been changed by the player), and the picture they give to the player; but it will not change their personality, their relationship with other villagers and the player, their current catchphrase, clothing, hobby, and the furniture in their house.

Despite the vast quantity of cheat codes and other methods mentioned above, over time, hackers may notice that what they are capable to do in-game will still present many limitations to their final desired changes, and will prove frustrating, as most of them may require being applied to the game whenever it is booted up. This is where editing the game's save file itself may come in handy.

Such is achieved by using a guide on how-to extract the save files from the game to be modified, and by using an external program for modifying the extracted save game, like for example, this program called ACSE (Animal Crossing Save Editor), which is compatible with all main games and some spin-offs (excluding Animal Crossing: New Horizons to the date).

Editing programs like ACSE enable hackers to permanently change certain aspects of their town and villagers that are usually hard to change via cheat codes, and it all can be done in a more interactive way on a computer.

This program, that also allows fixing previous hacking attempts with unwanted results, has many other options that can: 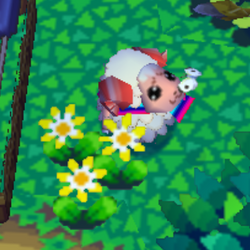 Dom, a villager first appearing in New Horizons, recreated to appear in Doubutsu no Mori e+.

In the same vein as ACSE, another external program called Custom Villager Creator, that can be used to create or edit e-Reader+ villagers.

Currently only designed for Doubutsu no Mori e+, this program comes with some reduced options focused on the creation of villagers. It has a texture editor and an editor for other villager characteristics like; their name, their initial catchphrase, their initial clothing, initial umbrella, initial house furniture, initial wallpaper and flooring, initial music, their personality, and their Zodiac sign (affecting the GBA minigames).

It only stores and opens villagers contained inside of ".yaz0" files, the default file type for villagers and a format used on many different Nintendo games.

They can give themselves any item in the game, as well as jump, which allows them to reach normally inaccessible places, including the island without a Game Boy Advance.

Seeds were a major threat to other player's towns in Wild World before online play was discontinued. Also, hackers in that game had access to a larger variety of tools and map editors to give themselves large sums of money and items, and a town layout of their choice. Action Replay codes are commonly used in Wild World.

Although the seed threat is diminished in City Folk, there are still hackers who play the game. Most use ACToolkit to customize the town layout, inventory, etc., and on the whole this works similarly to hacking in Wild World. Hackers may give even non-hackers DLC, which can appear in shops like the Able Sisters. The tool used to hack villagers in this game is known as Animal Villager Customization (NPC Tool).

The Nintendo 3DS is commonly hacked with homebrew and custom firmware, typically used to edit the town's map layout. New Leaf can also be "hacked" with an Action Replay, being a more simple option with no known consequences compared to the possibility of the 3DS "bricking" using the homebrew method. Injecting and extracting saves is extremely common in the AC community.

Since certain models of the Nintendo Switch have unpatchable security vulnerabilities, homebrew apps and game mods can be used on games such as New Horizons.

PC tools such as NHSE can be used to modify an island's details, such as the villagers living on it, the number of Bells and Nook Miles players have, the items catalogued by players, and the placement of buildings such as the Resident Services building, which cannot be moved in normal gameplay.

Mods can be used to alter the gameplay in various ways, such as allowing only certain species of fish to appear, or replacing the human player with a different animal character.

Popular uses of hacking in New Horizons have included "treasure islands," which have many rare items placed on them for visiting players to catalogue, and "star fragment trees," which are money trees that have been modified to replace the Bell bags with Star Fragments.