The Island Tour Creator was a website where users could make posters and tour videos of their Animal Crossing: New Horizons island to share with others. The site was announced alongside information for the 1.9.0 Free Update.[1] It was opened on March 24, 2021, and it was available until the end of 2021.[2][3]

While an overview of the site's features could be viewed on desktop computers, posters and trailers could only be created on mobile devices. The use of the website required a Nintendo Account. 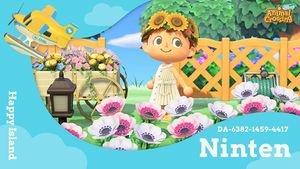 An example of a poster

When creating a poster, the user would choose their island name and a screenshot from New Horizons.[nb 2] A border was then chosen, and the image could be zoomed in and moved around within the border; each border also had two color options. The user would then choose a two-word tagline for their island using a predetermined list of words. The island's Dream Address could also optionally be added.

On December 8, 2021, five more poster borders were added, bringing the total number of borders to thirteen.[4]

An example of a trailer

When creating a trailer, the user chooses their island name and up to three out of nine features to show in the trailer: Photo Op, Museum, Fashion, Events, Home, Items, Faves, Neighbors, and Scenery. Up to three screenshots or one video of at least 10 seconds is chosen for each feature,[nb 2] and a thumbnail image is chosen. The user then chooses a two-word tagline for their island using a predetermined list of words. The island's Dream Address can also optionally be added.

Once the steps are complete, a 62-second trailer will be created. At the start of the trailer, a title card will appear and an narrator starts the trailer by saying, "Thank you for your interest in our island. Please join us for a virtual tour of all it has to offer." The tagline and the island's name is displayed; below that, the text "Tour Guide" is shown.

The trailer's narration will differ based on the three features that the user has chosen.

At the end of the trailer, the narration will say, "So, what do you think? Are you ready the see the sights? We hope to see you soon.". The tagline and the island's name are shown once again. If the player has chosen to show their Dream Address, it will be displayed below the island's name. After the card fades, the text "A Nook Inc. Production" is shown.

Taglines can be used in both posters and trailers.