The Peking Man is a standalone fossil introduced in Animal Crossing: Wild World that appears in all subsequent games except Animal Crossing: New Horizons, in which it is superseded by the Australopith.

After donating the fossil in New Leaf, its plaque in the museum will read: 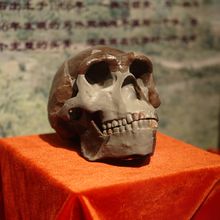 The fossil in Animal Crossing represents the first identifiable Peking Man, with parts of its skull, lower jaw and some teeth showing through the soil. Peking Man was a subspecies of Homo erectus (upright man) that lived around 500,000 to 780,000 years ago. The first part of a Peking Man, two teeth, was initially discovered near Beijing in 1926, followed by skull fragments, more teeth, and a lower jaw on the same site. More skulls were found there over the years, and in 1941, they were shipped to the US for safekeeping during World War II. Despite being packaged and placed on a ship, the fossils never reached their destination. Since then, other skull fragments have been discovered at the site.