The Apatosaurus (known as the Apatosaur in Wild World and City Folk) is a three-part fossil in the Animal Crossing series introduced in Doubutsu no Mori that appears in all subsequent games except Animal Crossing: New Horizons. 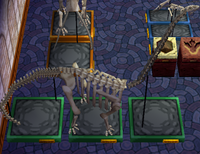 The Apatosaurus in the museum in Animal Crossing

"At long last... Apatosaurus is complete! Tremendous! Striking! Massive in every sense of the word! Hoo, I say, hootie hoo! What a truly glorious find! My cup runneth over! Now let me see, here... Where shall I begin? Apatosaurus... Hmmm... It lived in the late Jurassic period, and was a member of the diplodocid family of long-necked sauropods. You may be more familiar with the name brontosaurus, though that is a separate species of the same genus. It grew to some 70 feet in length. It had a small head, a long, thick neck, and an amazing whip-like tail, wot! Cra-ack! Whup-pshh! Oh, dear! Awfully sorry! I was envisioning myself with a massive tail! Hoo hoo!" 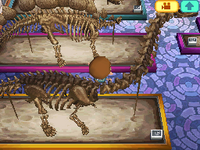 The Apatosaur in the museum in Wild World

"The apatosaur was once called a brontosaur, I'll have you know. It is well known for having a rather long neck and tail and for being an herbivore. However, it appears that, unlike the giraffe, it could not make its neck vertical! Yes, blood flow, you see. If it straightened more than 90 degrees, it might faint! Ah. Hoo. Terribly sorry. If I kept speaking at that rate, I might have fainted!"

"...Ah, hoo, let's see now. Yes! The apatosaurus is complete! Hoo hoo huzzah! What a vision it will be! The apatosaurus was once called a brontosaurus, as you may be aware. Both its neck and its tail were extremely long, making for a huge, herbivorous dinosaur... In fact, thanks to how large and weighty their bodies were, they often lived in lakes and swamps, eh wot? Their nostrils were located on their foreheads-- perhaps that helped! HOO! I...beg your pardon! I was so enthralled, I... I spouted hot air like a boiling teapot, eh wot?"

After donating the final part of the fossil in New Leaf, its plaque in the museum will read:

"With its impossibly long neck and tail, many questions exist regarding the lifestyle of the apatosaurus. Herbivorous dinosaurs tended to have larger digestive tracts than carnivorous dinosaurs. This distinction is what usually accounted for the thicker body, which the apatosaurus had. You might hear it called a brontosaurus, though this name is scientifically redundant."

Apatosaurus was a herbivorous sauropod dinosaur that lived in North America during the Late Jurassic period. It reached over 20 meters long and weighed around 20 tons, although some specimens have been estimated to be even larger. Despite its size, its diet appears to have consisted primarily of ground-level plants.