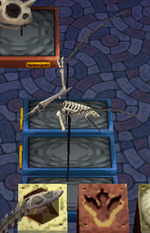 The Pteranodon in the museum in Animal Crossing.

When donating the final part to Blathers in Animal Crossing, he will provide the following information about the fossil:

"What's this, now, hm? Why, our pteranodon is... complete! Simply marvelous! Truly, this is beyond all joy! Hoo! Indeed, woo hoo! Amazing! I'm all aflutter. I'm atwitter! Now then, how can I begin to do a bit of justice to this magnificent master of the skies? Pteranodon... First things first, this winged creature is not actually a dinosaur, but rather a flying reptile. It did, however, live among many dinosaurs during the late Cretaceous period. Fascinating, eh wot? The structure of its immense wings suggests that it stayed aloft by gliding rather than flapping, you see? Imagine pteranodons with wingspans of over 23 feet swooping down to catch fish in their pelican-like beaks... Screee...SCHWAAAH!!! Oh, I do beg your pardon. Beaks, wings, flying... It's so very close to home!" 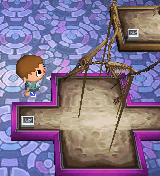 The Pteranodon in the museum in Wild World.

When donating to Blathers in Wild World, he will provide the following information about the fossil:

"The pteranodon was simply a wonderful creature. It emerged in the later age of dinosaurs, winging through the ancient skies. Though it could fly, it was most certainly not a bird! No, it was a reptile, wot! When it spread its wings, it was as big as a small airplane. Simply gargantuan! The very thought boggles my brain, to be honest. Ah. Hoo. Yes, so sorry. I'm actually rather glad the brute no longer exists."

The Pteranodon can be found in the second room of the fossil exhibit in the museum. Its plaque reads: 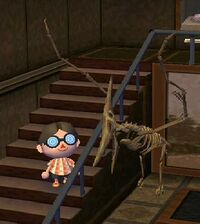 The Pteranodon in the museum in City Folk.

The Pteranodon can be found in the second room of the fossil exhibit in the museum. Its plaque reads:

After completing the fossil in New Leaf, its plaque in the museum will read:

"Pteranodons were a type of winged reptile, perhaps the ancestors of common birds. With their wings spread, they were about the size of a small airplane, but their bodies were very light. Strangely, they weighed less than 50 pounds, with wings made from skin, allowing for ease of flight."

The Pteranodon can be found in the left room of the fossil exhibit in the museum.

"The mighty Pteranodon! Among the very largest animals ever to fly, they were role models to us all. With a wingspan of over 23 feet in some cases, I find it simply stunning that they ever did more than glide! But fly they did, soaring dynamically and dramatically over land and sea! I wish I could have seen it..."

Pteranodon was a pterosaur which lived 86–84.5 million years ago around the Western Interior Seaway, a shallow sea that stretched down the middle of modern-day North America. Around 1,200 specimens of Pteranodon have been found, more than any other pterosaur. Males had an average wingspan of 5.6 meters, while females averaged 3.8 meters. They were known to have been piscivores, or fish-eaters. In the past, it was believed they could not take off from the water and would have skimmed the surface with its toothless beak (from which it gets its name) while flying. However, more recent studies suggest that not only were they able to land and take off from the water's surface, but they may also have been able to dive for fish.