Decomposer (n.)
that which decomposes.

What follows is a list of sources and references that should be useful. Those with a keen eye would notice that it is copied from the Nookipedia:Project Furniture page.

While Liquefy's NL guide and others may be complete, certain topics (e.g., region-exclusive events) still need some cross-verification and footage to back them up.

Keywords in Japanese and Korean 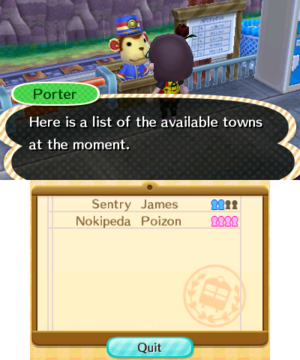 A screenshot in NL, asking the player which town they want to go to. Note that the names written are not censored.

Some images that I have uploaded in this page will contain user-generated content. For instance, the image File:NL Train Station choose destination.png contains names of players that I have interacted with in the past, and File:NL TPC Best Friend.jpg just blatantly shows a person's Town Pass Card.

It is assumed that the images that I upload are anonymous enough to not point to a specific player. In the case that you absolutely need to have some information removed or censored, feel free to contact me through my talk page or the Discord.

Curious findings about other localizations

Maybe this'll be used somewhere, I don't know. All of this info is about NH unless specified otherwise.