Hi AlexBot2004, can you please rename Nook Gamer 333? I saw they had asked around and they want to be called ToadFan700.

Hey, just wanted to mention that I re-added the Kyle-lycaon name trivia that was removed. In English, his name backwards is pronounced "like," which is identical to the pronunciation of the first syllable in "lycaon," and in Japanese, the first half of the name is identical to lycaon (リカルド and リカオン). HylianAngel (talk) 07:10, January 28, 2022 (EST)

Back in December, I standardized all of the special character pages to share the same format, where it states their species in the first sentence. I'm not sure if it should be removed only for DJ KK's page, since it makes this system inconsistent. HylianAngel (talk) 18:51, April 6, 2022 (EDT)

I changed it to make it more clear that DJ KK is an alter ego and not a separate character; the previous wording of the first sentence suggested the latter. ~ AlexBot2004 (Talk) 22:48, April 7, 2022 (EDT)

That's fair, although it is unfortunate that there doesn't seem to be an organic way to mention his species too. HylianAngel (talk) 23:43, April 7, 2022 (EDT)

For a long time, I had been battling with the idea of whether or not to add a dedicated DnM+ column to the list of islanders and list of villagers pages, since the DnM+ data is identical to the PG data for villagers. So for the islanders page, I just ended up converting the PG column into a DnM+/PG column. I eventually changed my mind and figured DnM+ should be its own separate column from PG (since there was room for the column, and it makes it much easier to visualize that DnM+ is its own completely unique game entry, taking up its own dedicated bit of width on the page). And then I followed up with adding the unique DnM+ column on the villagers list page.

However, you recently cleaned up the islanders page quite nicely, and re-merged the DnM+ and PG column. This makes a lot of sense, but now it's inconsistent with the villagers list page, where it still contains still two separate columns. I kinda want to almost split up the columns on the islander list page again, but that would be undoing your recent edit. Would it make more sense for me to re-merge the DnM+/PG columns on the villagers list page? I would be fine with it too, as long as both list pages are consistent with each other. If the columns are re-merged, the top of the table would look something like this. HylianAngel (talk) 06:01, October 22, 2022 (EDT)

I think merging the DnM+ and PG columns on both pages would be the best option because it makes it clear to the reader that the lists are identical between the two. Having separate columns may suggest that there is some difference, when there is not. ~ AlexBot2004 (Talk) 10:52, October 22, 2022 (EDT)

Can you change my name?[edit]

Can you change my name?[edit]

Hi could you change my name to Pikachu? Merry Christmas Animal crossing Fan (Pikachu) p.s could you leve a message when done

Hello! I was recently wondering something. If you were to upload images taken with DS Capture, would they be marked as low quality? DS capture devices simply take the raw pixel data of whatever is being displayed and puts it on your computer screen, with recording and screenshotting capabilities. On the right is an example. Thanks! Vince (talk) 02:28, January 3, 2023 (EST) 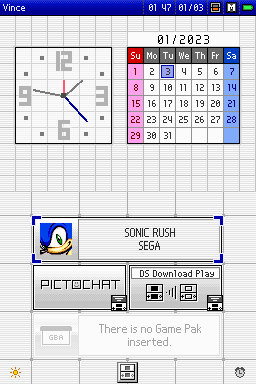 As you can see, the two screens are stacked on top of one another, but the images can be split and/or cropped.

Yep, using a DS capture card is perfectly fine since the output should be lossless and at native resolution. It's really only with the N64, GameCube, and Wii that direct capture isn't perfect due to those consoles not natively outputting digital video, but even then, the Animal Crossing screenshots you uploaded are of good quality. The Image-quality template is perhaps not worded the best, as it does not necessarily mean that the image is poor quality, but simply that there is something that could be improved about the image—in this case not being in the exact resolution the game renders at. At the end of the day, an image is better than no image at all, and your contributions so far are appreciated. ~ AlexBot2004 (Talk) 02:53, January 3, 2023 (EST)

On the upload policy page, it says there are three image formats, but then lists like 5 formats. I get if maybe .mp4 doesn't count as an image format. Is it because .svg doesn't count either? HylianAngel (talk) 22:17, January 4, 2023 (EST)

I think that was a leftover from an earlier revision, and the number was never updated when new formats were listed. I've gone ahead and removed the count. ~ AlexBot2004 (Talk) 23:23, January 4, 2023 (EST)

Hey Alex! I am here to thank you because on the page about lazy dialogue in New Horizons my friend made an edit that was just spam and you removed it and I just wanna say thx even tho it was so long ago! - unsigned comment from Zabro29 (talk • contribs)