The dreadful painting is replaced by the lovely painting in Doubutsu no Mori+, which shares the same internal hexadecimal ID. 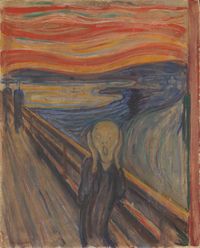 The dreadful painting is based on The Scream by Norwegian artist Edvard Munch. Munch recalled that he had been out for a walk at sunset when suddenly the setting sunlight turned the clouds "a blood red." He sensed an "infinite scream passing through nature." Scholars have located the spot to a fjord overlooking Oslo, and have suggested other explanations for the unnaturally orange sky, ranging from the effects of a volcanic eruption to a psychological reaction by Munch to his sister's commitment at a nearby lunatic asylum.

Notably, as a result of Munch's late death relative to other artists represented in the Animal Crossing series, The Scream was still under copyright at the time of Doubutsu no Mori's release in 2001; it would not enter the public domain until 2015, alongside the rest of the artist's lifetime portfolio (coincidentally, 2015 also marked the entry of Piet Mondrian's portfolio into the public domain; Mondrian's Composition with Red, Yellow and Blue had been the basis for the similarly removed novel painting).[1][2] While no official statement from Nintendo was given, these rights issues appear to be the reason behind the dreadful painting's absence from Animal Crossing onwards.