The informative statue is a statue in Animal Crossing: New Horizons introduced in the 1.2.0 April Free Update. It is based on the Rosetta Stone. 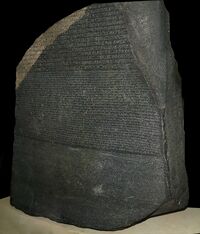 The Rosetta Stone is a fragment of a decree written in Memphis, Egypt, in 196 BC on the behalf of King Ptolemy V. The stone garnered fame in the western world upon its 1799 discovery by French soldier Pierre-François Bouchard during the Napoleonic campaign in Egypt: because the fragment contained versions of the same text in Egyptian hieroglyphs, Demotic script, and ancient Greek script with only minor differences between the three, it became a vital tool for western anthropologists in deciphering the previously enigmatic hieroglyphs. While three additional fragments of the original decree were found in the ensuing centuries, the Rosetta Stone remains the most famous, and as such serves as the basis for the informative statue in New Horizons.