The rock-head statue is a statue in Animal Crossing: New Horizons introduced in the 1.2.0 April Free Update. It is based on the Olmec colossal heads. 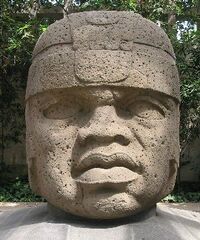 The Olmec colossal heads are a series of traditional basalt sculptures carved by the Olmecs, the earliest known Mesoamerican civilization to have existed in human history, having occupied what is now Veracruz and Tabasco, Mexico, between 1500 BC to 400 BC. The colossal heads, often around the size of an adult human, are believed to represent rulers who were respected by and seen as powerful in Olmec tradition. While first discovered by José María Melgar y Serrano in 1862, the heads would still remain poorly-documented and obscure before the 1862 discovery was re-excavated by Matthew Stirling in 1938, after which they would skyrocket in popularity among the archaeological world and instigate further investigations into the Olmecs. Today, they stand in the public eye as the most iconic relic of Olmec civilization.