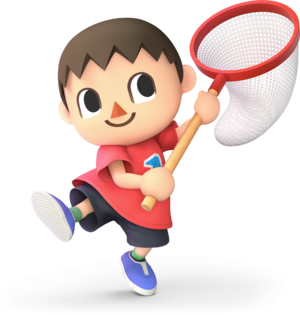 Artwork of the Villager from Super Smash Bros. Ultimate

Their formal reveal was during E3 2013 and the subsequent reveal of Super Smash Bros. for Nintendo 3DS / Wii U, being one of three characters (alongside Mega Man and Wii Fit Trainer) showcased during the event.[1] Villager is classified as Fighter #45.

Villager is heavily based on City Folk's player design, with the default male Villager design based from City Folk promotional material. Subsequently, the default female Villager is also based from City Folk promotional material. The rest of Villager's alternate costumes features different hairstyles, eye pupils, and clothing, in light of the Animal Crossing series emphasis on player customization.

In Super Smash Bros. Ultimate, Villager is an unlockable fighter; as such they will need to be unlocked by completing either of the following requirements:

With the exception of the last option, the player would then need to fight Villager on Smashville.

Villager's moveset is a combination of various mechanics throughout the Animal Crossing series, as well as references to other games. Their neutral attack has Villager using boxing gloves to attack their opponents, referencing the NES game Punch-Out!. For each of their tilts, they either use an umbrella, wave a stick, or pull weed. When they perform a dash attack, they'll drop a potted sapling onto their opponents.

For each of their smash attacks, they'll either pull a bowling ball, summon a Fountain Firework, or dig their opponents with a shovel. For their aerial attacks, they fire a slingshot for their backward and forward aerial, and swing one to three turnips for their up and down aerial. Finally, for their grab, they use a net to catch their opponent.

The following custom special moves are only in Super Smash Bros. for Nintendo 3DS / Wii U:

Villager's Final Smash as shown in Move List in Ultimate

Villager's Final Smash is Dream House, where they first trap an opponent before summoning Tom Nook and the Nooklings to the stage. The Villager pays them to build a house quickly, and once that's accomplished, a jingle heard after completing a home loan in New Leaf plays. Afterwards the house explodes, causing damage to the opponent that Villager had trapped and surrounding fighters. This move would be the inspiration for Isabelle's Final Smash in Super Smash Bros. Ultimate: Dream Town Hall.

In Super Smash Bros. Ultimate, two of the alternate costumes were changed to have darker skin. This was not present in the E3 Demo of Ultimate.

Both versions contain the regular and alternate trophies, while the Wii U version includes a Final Smash trophy, Dream Home.