The Common Painting is a painting in the Animal Crossing series introduced in Doubutsu no Mori. It is based on Jean-François Millet's The Gleaners.

The Gleaners
Artist: Jean-François Millet
Made in 1857
Oil on canvas

While initially absent from Animal Crossing: New Horizons, the Common Painting was added in the 1.2.0 April Free Update. 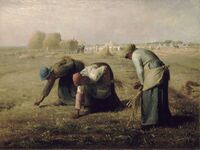 The Gleaners, painted in 1857, shows three peasant women collecting scraps of wheat in the foreground, their poverty obvious despite the landowner's bounty in the background. When it was first exhibited, the painting received negative reviews from the upper class, who saw it as glorifying the common worker without any references to the Bible. It is a good example of Realism art. Once housed in the Louvre, The Gleaners is currently on display in the Musée d'Orsay.