The Sower
Artist: Jean-François Millet
Made around 1850
Oil on canvas

As with all artwork in Animal Crossing: New Horizons, the moody painting was added in the 1.2.0 April Free Update.

The Sower
Jean-François Millet, circa 1850
Oil on canvas 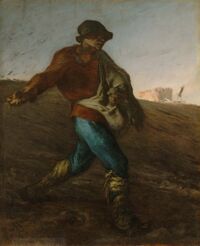 A pioneering work of realism, this oil painting, completed in 1850, shows a glum-looking peasant sowing seeds in a field. This image of poverty enraged the upper classes of France at the time, who criticized his work for showing how workers struggled- many paintings at this time expressed an idyllic middle-class life, full of color and warmth.

The Sower is currently on display in the Museum of Fine Arts in Boston, Massachusetts.