The Worthy Painting is a painting in the Animal Crossing series introduced in Doubutsu no Mori. It is based on Eugène Delacroix's Liberty Leading the People.

Liberty Leading the People
Artist: Eugène Delacroix
Made in 1830
Oil on canvas

While initially absent from Animal Crossing: New Horizons, the Worthy Painting was added in the 1.2.0 April Free Update. 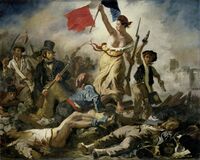 A commemoration of the July Revolution of 1830, Liberty Leading the People depicts a woman who personifies the concept of Liberty and the goddess of the same name. Holding the flag of the French Revolution in one hand and a bayonetted musket in the other, she leads a group of determined fighters from a wide array of social classes — ranging from the bourgeoisie to the poor urban workers — over a mound of corpses.