In New Leaf, the statue is displayed in the first artwork room, in the southeast quadrant.

As with all artwork in Animal Crossing: New Horizons, the ancient statue was added in the 1.2.0 April Free Update. 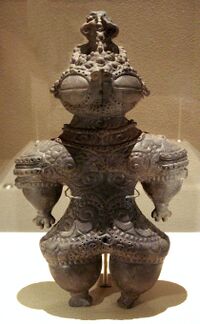 Created from 1000-400 BC, these fired pottery pieces are widely believed to be representations of mother goddesses associated with fertility, due to their female body shape, big eyes, small waists, and wide hips. As the pieces are fragile, it is quite rare to find unbroken Dogū, such as the one found in the Animal Crossing series.