Arearea
Artist: Paul Gaugin
Made around 1892
Oil on canvas 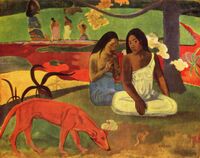 Arearea, also known as Joyeusetés in French, is a painting by Paul Gauguin from 1891. It is on display at the Musée d'Orsay in Paris.