David
Artist: Michelangelo
Made around 1504
Marble

As with all artwork in Animal Crossing: New Horizons, the gallant statue was added in the 1.2.0 April Free Update. 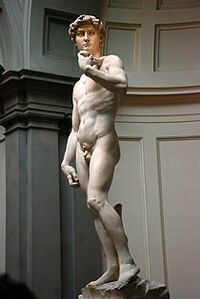 Sculpted by the acclaimed Italian artist Michaelangelo between 1501 and 1504 — during the Renaissance — David is a seventeen foot tall marble statue of David, a Biblical hero and a favored subject of art in Florence. David is depicted standing nude, posed in the contrapposto posture.

Originally commissioned as one of a series of statues of prophets to be positioned along the roofline of the east end of Florence Cathedral, the statue was instead placed in a public square outside the Palazzo della Signoria, the seat of civic government in Florence, where it was unveiled on September 8, 1504.