The Serene Painting is a painting in the Animal Crossing series introduced in Animal Crossing: City Folk. It is based on Leonardo da Vinci's Lady with an Ermine.

Lady with an Ermine
Leonardo da Vinci, circa 1490
Oil on wood panel

In New Leaf, if the woman is holding a skinny cat rather than a plump ermine, it is a forgery.

In New Horizons, if the ermine has a yellow bill or beak and a black-and-white patterned coat rather than pure white, it is a forgery. 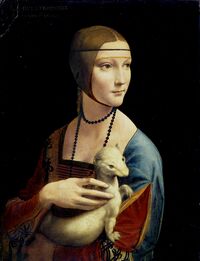 Lady with an Ermine

Painted from 1489 to 1490, Lady with an Ermine depicts a woman holding an ermine- a stoat in its winter coat. Despite the title, it would appear that this "stoat" is actually a ferret.

This painting's name in the Animal Crossing series was possibly given due to the girl's peaceful, benign expression.

Stolen from Poland in 1939 by the Nazis, it was later recovered by the Allied forces after World War II and was returned to the Czartoryski Museum in Kraków.