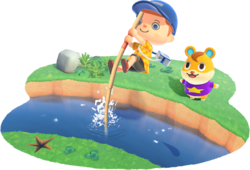 Artwork of a player using the vaulting pole in Animal Crossing: New Horizons

The vaulting pole is a tool in Animal Crossing: New Horizons that allows the player to vault over a body of water such as a river or pond. The tool is introduced after Blathers arrives on the island to aid in the search for fossils and allows the exploration of previously unavailable areas that were restricted by water.

The Resident Representative receives a recipe by speaking to Blathers in his tent. Subsequent players may have to purchase the recipe from Nook's Cranny (or Timmy in the Resident Services tent depending on game progress), unless they also speak to Blathers on the same day.

Vaulting across a river.

The player must be holding the vaulting pole and be positioned adjacent to the edge of a water feature. When used, the player jumps over the gap and lands the other side. The animation is accompanied by a unique sound effect. Nearby fish will be scared away after a successful vault.

Larger gaps and waterfalls cannot be vaulted. There is no animation or sound played when the player uses the pole on a gap that is too large. If the player tries to use the Vaulting Pole to get across a piece of river, and the area the player is landing on has a opened hole, the player will fall down the hole as if they had stepped on a pitfall seed.

The vaulting pole will not break after any number of uses. It shares this infinite durability property with the ladder.

Within the game's universe, vaulting poles may have been first popularized under the brand name "StickThing". When the player interacts with a peppy villager while holding the pole in New Horizons, the villager may refer to having had a StickThing in the past, and proceed to sing the jingle from its commercials.