The Famous Painting is a painting in the Animal Crossing series that appears in all games to date. It is based on Leonardo da Vinci's Mona Lisa; it is one of three da Vinci pieces to appear in the Animal Crossing series, alongside the Academic Painting and the Serene Painting. Its name comes from the painting's status as one of the best-known works of art in the world.

In Animal Crossing: City Folk, the Famous Painting is hung behind a protective fence in the museum. 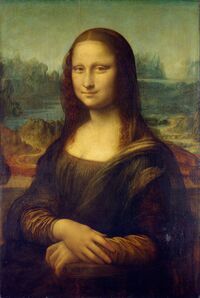 Mona Lisa is a portrait by Italian artist Leonardo da Vinci. It has been described as the most well-known work of art in the world. The portrait, which is of Italian novelwoman Lisa del Giocondo, is generally believed to have been painted from 1503 to 1506, although some historians believe da Vinci continued working on it until 1516 or 1517. It has been on display at the Louvre in Paris since 1797.