The Scary Painting is a painting in the Animal Crossing series introduced in Animal Crossing. It is based on Sharaku's Ōtani Oniji the 3rd as Yakko Edobei.

The Scary Painting in Animal Crossing replaces the Healing Painting from Doubutsu no Mori+, which shares the same internal hexadecimal ID.

While initially absent from Animal Crossing: New Horizons, the Scary Painting was added in the 1.2.0 April Free Update. 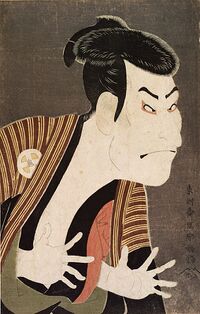 Ōtani Oniji the 3rd as Yakko Edobei is a Japanese print by Sharaku, a Japanese artist. Little is known of the artist, as he was active for only around ten months in 1794 and 1795, and it was speculated that he may have been part of a group of artists that also used the name Sharaku—this word is a shortened version of the word sharakusai, meaning nonsense in Japanese.

Sharaku did not become popular until the 20th century; pieces by him (or them) are now considered to be a famous example of Japanese woodblock art (ukiyo-e).

Ōtani Oniji the 3rd as Yakko Edobei depicts a Kabuki actor supposedly during a performance. The painting is on display in the Tokyo National Museum.