Animal Crossing Plaza is a free Nintendo eShop application for the Wii U. It was released on August 7, 2013 in North America and PAL countries, and on August 8, 2013 in Japan, and was available until December 22, 2014. 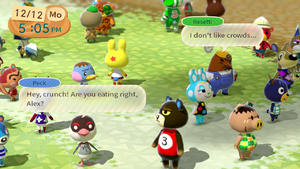 Lloid will also direct the player to the Animal Crossing Series Miiverse community.