Lily of the valley

(Redirected from Lily of the Valley)

Lilies of the valley (known as Jacob's ladders prior to Happy Home Designer) are a type of flower in the Animal Crossing series, that first appeared in Doubutsu no Mori e+. They spawn only when the town is in perfect condition. This flower does not have any variations, appearing only as a cluster of whitish-green, bell-shaped buds dangling from a leafy plant. The plant does not breed when placed next to other lilies of the valley, but increases the chance for hybrid flowers if placed nearby other plants. They typically spawn at the top of cliffs (one per acre), except in Animal Crossing: Wild World, where cliffs do not appear. 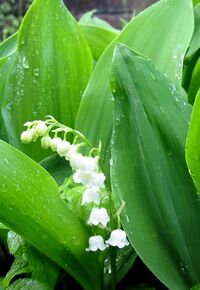 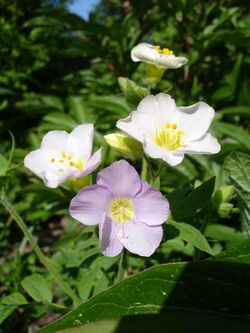 Earlier games in the series refer to the plant as "Jacob's ladder," which is actually the common name for the Polenonium genus of plants. This was a translation error: they are correctly called すずらん (suzuran, the Japanese name for lilies of the valley) in the Japanese versions. The in-game files also call these flowers lilies, and the furniture award from Weeding Day resembling this flower is called the lily lamp. Polenomium flowers are usually purple or blue, and appear very different from the distinctive bell-shaped lilies of the valley.