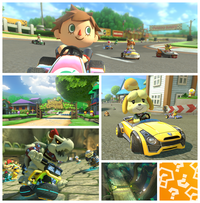 The Animal Crossing course was one of three Mario Kart 8 courses chosen for players to race on during the 2015 Nintendo World Championships on June 14, 2015.

Some later Wii U premium bundles included both the game and the DLC together. The enhanced port of the game on Nintendo Switch, Mario Kart 8 Deluxe, incorporates this DLC as standard in-game content. However, unlike before, vehicles that appeared in the original pack are now unlocked at random by collecting certain amounts of coins in races.

The official contents of the pack, showing the Animal Crossing themed track and characters

Player (or Villager), from the Animal Crossing series

Dry Bowser, from the Mario series

The following villagers and special characters can make appearances in the sidelines of the Animal Crossing course. Each character, with the exception of Snowboy, can appear in every season; however, which characters appear and their locations differ between races.