Icon for the Gigas Giant Clam in Pocket Camp

The gigas giant clam appears as a shell in Animal Crossing: Pocket Camp and was available for a limited time as part of the Wham-Bam Clam Goals event, from October 9 to October 12, 2020. During the event, the shell would appear on the beach at Saltwater Shores, where it could be picked up. After the event, remaining gigas giant clams can stay in the player's inventory, where they can still be sold, used for animal requests, or listed in the player's Market Box. The sell price for this shell is

3,000 Bells. For villager requests, it is part of rarity tier 3, which earns the player

Friendship Points, as well as a chance to earn a bronze treats box and a Regular Fortune Cookie, if the shell is used to fulfill a request.

"Gigas giant clams live in warm-water coral reefs and are the biggest bivalves in the world. Growing as wide as six feet and weighing up to 600 pounds, these clams can live to be 100 years old. And yes, these mighty creatures look as though they could eat a swimmer whole. But they eat plankton instead and get valuable nutrients from an algae they live in symbiosis with. Indeed, these enormous gents get all the sustenance they need by lying face up with their shells half-open. If such was my life, I'd be happy as a clam too." 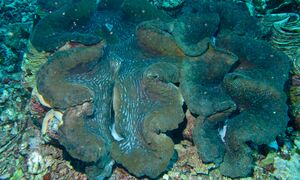 Tridacna gigas is one of the most endangered clam species. There is documentation of their existence as early as 1521. One of a number of large clam species native to the shallow coral reefs of the South Pacific and Indian oceans, they can weigh more than 200 kilograms (440 lb), measure as much as 120 cm (47 in) across, and have an average lifespan in the wild of over 100 years. They are also found off the shores of the Philippines and in the South China Sea in the coral reefs of Sabah (Malaysian Borneo).