Doubutsu no Mori was first showcased in a one-minute trailer at Space World 2000,[1] a Japanese video game trade show hosted by Nintendo. Nine screenshots were sent to the press and published in an article on Nintendo's Japanese website.[2][3] The trailer and screenshots show some differences from the final release.

The logo shown at Space World 2000 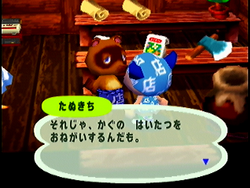 A screenshot of Nook's Cranny from Space World 2000, showing a different shop wallpaper and carpet, different item sprites, and a shirt worn by the player that does not appear in the final game.

On July 25, 2020, partial source code for Doubutsu no Mori was leaked onto the Internet along with source code several other Nintendo games. The source code contains many assets and pieces of development information that are not in the final game.

"CAT13" redirects here. For the cat villager who would later be assigned "cat13", see Stinky.

The following unused content appears in the final game and was removed in Doubutsu no Mori+ and all subsequent releases.

The chest, modern den chair, nice speaker, rack, unused dresser, unused monkey, and zabuton are furniture items that can only be obtained through the use of memory editing. The items appear in Animal Crossing with English names, but their models are only in Doubutsu no Mori.

The unused monkey is animated and the modern den chair can be sat on. The rest of the items have no functionality.

パーティードレス (party dress) and タキシード (tuxedo) are two fully functional clothing items that can only be obtained through the use of memory editing.