While initially absent from Animal Crossing: New Horizons, the Turban Shell was added in the 1.3.0 Free Summer Update.

In August 2020, it became available as a limited-time item in Animal Crossing: Pocket Camp, where it is categorized as a shell rather than a sea creature.

"I got a turban shell! It's like a little fancy hat!"

Icon for the Turban Shell in Pocket Camp

The Turban Shell appears as a shell in Animal Crossing: Pocket Camp and was available to collect for a limited time as part of the Sandy Shellfish Goals event, from August 20 to August 23, 2020. During the event, the shell would appear on the beach at Saltwater Shores, where it could be picked up. After the event, remaining Turban Shells can stay in the player's inventory, where they can still be sold, used for animal requests, or listed in the player's Market Box. The sell price for this shell is

Upon donating the Turban Shell to the museum, it can be found in the large pool in the first room of the sea exhibit, along with many other species of sea creatures. The exhibit has this to say about the Turban Shell:

"They are related to spiral shells. Also, they have lids that cover the openings of their shells. When they walk, they remove the lid and move in the shell by shuffling their feet, much like snails. They become active by night and eat seaweed. They are delicious when cooked in the shell."

"The turban shell is a sea snail with a rather nifty trick up its sleeve...er, shell. you see, this snail carries a hard, round, button-like "operculum" with wherever it goes. what is an operculum, you ask? why, it is a trapdoor of sorts! when danger approaches, the snail slips into its shell and pulls this trapdoor closed over the opening. thus it is locked safe and sound inside. And bravo, I say! Bravo! When trouble comes knocking, just do what the turban shell does. Shut the door and turn out the lights!"

Once donated, the Turban Shell can be seen in the coast tank alongside the Abalone and Seaweed. 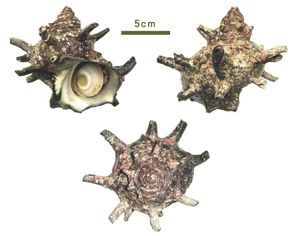 The scientific name Turbo cornutus, literally means "horned turban," and it is characterized by a hard, ventricose, spiny, imperforate shell of which the length varies between 65 mm and 120 mm (2.55 in and 4.72 in). It has a large, thick, green-gray shell with irregular incremental striae and spiral lirae. The shell has about 5-6 whorls, which turn clockwise and have horny protuberances. The body whorl is ventricose, somewhat bicarinate, armed about the middle with two spiral series of erect tubular spines, and frequently a smaller accessory row above. The lower series of spines is sometimes absent. The thickness and shape of the shell and the horns vary greatly according to environmental conditions. The sutures are deeply impressed. The oblique aperture is rounded and is about 3.5 cm (1.38 in) in diameter, and is green or red-brown. The thin inside lip of the shell is not smooth, but rough and granular. The broad columella is flattened and somewhat grooved, produced and channelled at its base.

Turbo cornutus develops an operculum, which is calcareous, concave and brown within. It contains four whorls. The nucleus measures one-third the distance across the face. The operculum itself bears a deep, spiral groove and is also granular on the convex outer surface. This outer surface is white or tinged with brown and olive, more or less sharply asperate with elevated points, and with a spiral rib commencing in an axial elevation and terminating at the margin of increment. When separated from the attached animal, the inner side of the operculum is flat, with a somewhat smooth spiral.