"I caught a giant petaltail! I tamed the beast!"

"I caught a petaltail dragonfly! He may be big, but I'm bigger!"

When donated to the museum, Blathers says the following:

"Hootie hoo! It's like looking at a living ancestor of today's dragonflies! A vile ancestor... It's so big that when I tell people I spotted one, no one wants to believe me. Folks claim I'm being daft. It's understandable, wot? When I look at this thing, I think I might very well BE hallucinating..."

"Dragonflies very similar to petaltail dragonflies have been found in fossils from the Jurassic period. They are considered "living fossils" that haven't changed much since prehistoric times. Their wingspan is over 16 cm, making them the world's largest dragonfly." 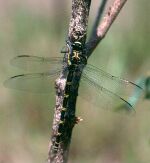 Petalura ingentissima, commonly known as the giant petaltail, is the largest dragonfly species in the world, its wingspan measuring 160 mm. Its range is restricted to the northern parts of Queensland, Australia, and unlike other species, the larva live in underground burrows - from which they prey upon passing insects. Although the genus to which the giant petaltail belongs dates back to the Jurassic period, its members have not evolved substantially, a fact able to be observed by examining the fossils that have been discovered.