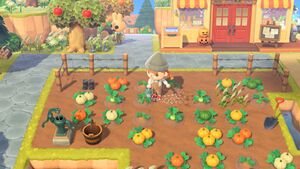 Pumpkins are items in Animal Crossing: New Horizons introduced in the 1.5.0 Fall Update that are used as crafting materials. They are grown from Pumpkin Starts, which can be purchased from Nook's Cranny during October or Leif every month, with pumpkins being discounted during October. Orange Pumpkins can also be obtained from villagers who are crafting during the month of October if the player has already learned the Spooky Series DIY recipe they are crafting. Pumpkins can also be used in crafting in the 2.0 update.

Pumpkins are primarily used to craft the Spooky Series, and as ingredients for the pumpkin pie dish on Turkey Day.

The four stages of growth

Once ripe, pumpkins can be either orange, green, yellow, or white, with a 70% chance of them being orange and a 10% of them being green, yellow, or white. Once pumpkins are picked, they will regrow starting at the second stage of growth. It is also possible to replant a specific pumpkin color to only cultivate that specific pumpkin color (e.g. a Green Pumpkin produces a Green Pumpkin Sprout).