The Walker Cicada[nb 1] is a bug in the Animal Crossing series that has appeared in every game to date. It has a unique sound, different to other cicadas, which is best described as a noise similar to walking on a sticky floor surface. It is the second-most expensive cicada, selling for

In the games that the Walker Cicada appears in, it is a common bug that the player can encounter, and can be found on trees. In Animal Crossing: New Horizons, it can be caught from summer to the beginning of fall.

"I caught a walker cicada! If he'd'a been runnin', I might not have caught him!"

"I caught a walker cicada! These guys chirp funny!"

"I caught a walker cicada! Quite the walker AND the talker!"

"I caught a walker cicada! I'm the one walkin' the walk now!"

Alternate catch quote: "I caught a walker cicada! Walking in the rain it seems!"

"I caught a walker cicada! Pffft... I walk all the time and no one calls me "Walker <Player>.""

Alternate catch quote: "I caught a walker cicada! It must hate getting its feet wet."

"Cicadas. What can one say about these odd insects? They are certainly...noisy! Noisy enough, I should say! Their horrid caterwauling is awfully irritating, you know. About as musical as a train wreck, eh wot? I'm sure that the cicadas have quite valid reasons for such boisterous behavior, but I dare say there are limits. And they have those membranes on their abdomens, which vibrate to create those disturbing tones...Odius."

"Depending on where you are in the world, the cry of the walker cicada changes. Who do they think they are? Using dialects and whatnot! I mean, really!"

"Apparently, walker cicadas cry out in an attempt to obscure the calls of other, similar cicadas. I should think that to the average fellow, it just sounds like the cicadas are merely singing together. In any case, I don't suggest looking for them. Their voices may fascinate, but their faces nauseate!"

"The walker cicada is quite the noisy thing. I tell you, this impolite pest simply canNOT abide the quiet. In the heat of summer, the male strikes up a strange rattling song, hoping to woo a mate. When other male cicadas hear this rhythmic racket, they join right in... As if it were a sing-a-long!
My head aches at the thought of it."

The Walker Cicada can be found in the bug exhibit of the museum right when you walk in, on the trees with the rest of the cicadas. 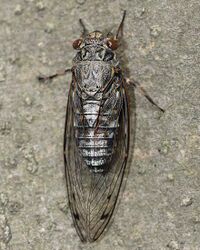 Meimuna opalifera is a species of cicada found in China, Japan, the Korean Peninsula, and Taiwan[1] and is one of the smallest cicadas of the region, at an average of 44 millimeters. It should not be confused with the Walker's Cicada, scientifically named Megatibicen pronotalis, a species found in mid-west America.