The Brown Cicada[nb 1] is a bug in the Animal Crossing series that has appeared in every game to date. It makes a unique chirping sound, which resembles what could be described as a continuous alarm or vibrating sound, rather than the regular chirp.

In the games that the Brown Cicada appears in, it is a common bug that the player can encounter, and can be found on trees. In Animal Crossing: New Horizons, it can be caught during summer.

"I caught a large brown cicada! ...Or is he just really dirty?"

"I caught a brown cicada! These guys are everywhere!"

"I caught a brown cicada! I hope it's not afraid-a!"

"I caught a brown cicada! These things are everywhere!"

"Cicadas. What can one say about these odd insects? They are certainly...noisy! Noisy enough, I should say! Their horrid caterwauling is awfully irritating, you know. About as musical as a train wreck, eh wot? I'm sure that the cicadas have quite valid reasons for such boisterous behavior, but I dare say there are limits. And they have those membranes on their abdomens, which vibrate to create those disturbing tones...Odius."

"It's common knowledge that cicadas spend much of their lives in the ground, but... They are STILL too noisy! Honestly, they could be a slight more courteous, wot? Hoo, but then again, who would expect a wretched bug to have manners?"

"Ah, hoo, the brown cicada. The call of this creature is said to sound like hot oil sputtering, eh wot? I'm rather not sure that hearing the sound of deep-frying on a hot summer night is a pleasant thing..."

It can be found in the middle terrace, on the front-most tree of the middle island, sharing it with the Robust Cicada.

"The crying of brown cicadas is usually associated with the sound of hot oil sputtering. Their wings are brown instead of being transparent, making them a rare species throughout the world. While completely harmless by themselves, in swarms they can cause devastation to crops."

"Cicadas are obnoxious insects. And not just brown cicadas mind you... but all cicadas! They flex ribbed membranes on their torso called tymbals to make a loud snapping sound. So rude! Hoo! Yes, it is only the males who make the noise. Sometimes at a volume that can produce pain at close range! Appallingly inconsiderate, I must say..." 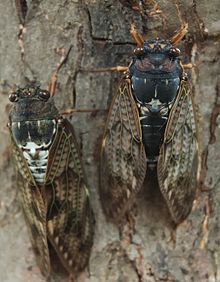 The Graptopsaltria nigrofuscata (large brown cicada) is called tatarakihi by the locals, in their native language, Maori. Much like all cicadas, the brown cicada has transparent wings, small bodies in comparison, and large eyes on either side of their heads. They are considered a pest by farmers because they attack and eat crops. The literal translation of their japanese name (アブラゼミ (Aburazemi)) is Oil Cicada, likely due to the fact that some cultures hear their calls as the sounds of oil sputtering from a frying pan.

This page could be improved with the addition of images.
You can help by uploading one or more images and including them on this page.
Retrieved from "https://nookipedia.com/w/index.php?title=Brown_Cicada&oldid=805722"
Categories:
Hidden categories: