"I caught a giant cicada! Luckily I didn't need a bean stalk!"

Alternate catch quote: "I caught a giant cicada! Guess it doesn't feel like singing in the rain!"

Upon donation to the museum, the exhibit has this to say about the Giant Cicada:

"As the name might indicate, giant cicadas are one of the largest species of cicada in the world. They used to live mostly in warmer western Japan, but they've now also moved to urban eastern Japan. Though they're now common in these areas, they aren't well known in other parts of the world."

It can be found in the upper left room of the insect habitat, with the other cicadas.

The giant cicada is rather aptly named. That is, it's a truly enormous bug. Ugh! These beasts spend most of their lives underground where they gorge on tree roots. But once they emerge, they make an awful racket. In fact, some say their song sounds like a shrieking siren. I would rather listen to nails on a chalkboard. 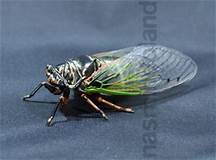 Quesada gigas is a large cicada that can be found in America, although the Giant Cicada in-game may be the Bear Cicada of Japan. (熊蝉 "Kumazemi").