In the games that the Monarch Butterfly appears in, it is a common bug that the player can encounter, and can be found flying around flowers. In Animal Crossing: New Horizons, it can be caught during fall. It is the only butterfly to appear during fall and one is of four bugs (itself, the Cricket, the Bell Cricket, and the Migratory Locust) to be limited to fall.

"I caught a monarch butterfly! This butterfly can travel!"

"I caught a monarch butterfly! To me, Your Majesty!"

"I caught a monarch butterfly! Who rules now? I rule now!"

"I caught a monarch butterfly! Guess the butterflies are a democracy now!"

"The monarch butterfly got its regal name because of its orange coloring, wot? Yes, it reminded people of the king of England, aka William of Orange. To be perfectly honest, if I were His Highness, I'd be rather miffed! Blech! Truly, to have a filthy bug remind people of you... Absolutely appalling, wot!"

The Monarch Butterfly can be seen in flying around the upper right corner of the first bug room, occasionally perching on flowers.

"Monarch butterflies are quite colorful, aren't they? ...As it happens, the colors indicate they're poisonous! I certainly start to feel queasy when I look at one. Though that happens with all bugs..."

After donation, it can be seen flying around on the upper tier of the insect exhibit.

The Monarch Butterfly resting on a tree in the Museum in Animal Crossing: New Leaf

Upon being donated, the butterfly can be found in the room of the bug exhibit which has the light in the middle, resting on the tree which also is home to a Lantern Fly. The exhibit has this to say about the Monarch Butterfly:

"Monarch butterflies are known for their lengthy southward migrations in the winter. Once spring rolls around, they return to their original homes until the weather turns cold again. In their southern habitat during winter, you may see many thousands of them covering the trees."

"Did you know the monarch butterfly migrates south for the winter and returns north for the summer? Indeed, these horrid orange beasties do not tolerate the cold and travel 3,000 miles to escape the winter. During the journey, they cluster together in trees by the thousands just to stay warm. Imagine! Hordes of the foul flittering fiends huddled together in one place! If only they'd put on tiny coats instead."

After donation, it can be seen flying around in the butterfly room. 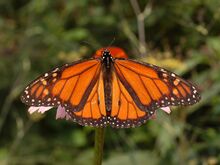 The monarch, sometimes known as the wanderer, is a milkweed butterfly with a wingspan ranging from 8.9 to 10.2 cm. Native to North America, the monarch can also be found in New Zealand, Australia, Portuguese archipelagos, and occasionally in Western Europe. Aside from their vivid orange coloration, the monarch is famous for its annual migration to and from North and South America, of which no single individual survives — the entire journey takes three to four generations of monarchs to complete. Due to their milkweed diet, the monarch is toxic, or at the very least distasteful to many would-be predators. The highest concentration of toxins can be found in the wings and abdomen of the monarch. The males have a brighter coloration than the females, and are slightly larger. Males also have two small black spots on their rear-wings [see picture], something that is not shared with females.