The Red Dragonfly[nb 1] is a bug in the Animal Crossing series that has appeared in every game to date.

In the games that the Red Dragonfly appears in, it is the most common bug that the player can encounter, and can be found flying. In Animal Crossing: New Horizons, it can be caught during fall.

"I caught a red dragonfly! I wonder if it can breathe fire..."

"I caught a red dragonfly! It's the color of sunset!"

"I caught a red dragonfly! It's magic!"

"I caught a red dragonfly! Wonder if it breathes fire..."

"I caught a red dragonfly! Didn't even have to roll for initiative!"

"<Player>, have you ever peered closely into a dragonfly's eyes? Blech! Ghastly, really. Hoo, but I digress..."

"Ever looked into the eyes of a red dragonfly, or any dragonfly, for that matter? They've "compound eyes," where multiple eyeballs are stuck together, wot! Just think of all those beady little eyes on you! Blech! How very vile... To be honest, bugs with only TWO eyes make me gag."

The Red Dragonfly can be found flying around the second insect room in the museum.

"Since red dragonflies can't regulate their body temperatures, they only come out in the fall. They actually perish when the heat climbs over 86 degrees Fahrenheit. No summer fun for them, wot?"

The Red Dragonfly can be seen in the lower tier of the insect exhibition, flying around the small pool of water in the exhibit closest to the entrance.

Upon being donated, the Red Dragonfly can be found in the first room of the bug exhibit, flying around the pond and occasionally resting on the fence. The exhibit has this to say about the Red Dragonfly:

"Red dragonflies are seen in the fall, as they're rather sensitive to the heat of summer. They stay in the mountains during the summer and come down to the plains in cooler weather. The males' bodies turn red when they're mature, but their heads and thoraxes are brownish. The females have a more yellowish color and aren't as red as the males, making them easy to tell apart."

"I won't deny that the wretched red dragonfly is an elegant aeronaut. It manipulates its four wings quite uniquely so it can hover and maneuver through the air with ease. But the veins on its wings! What ghastly things! One can't help but gasp at the sight of them... Appalling aerodynamics, indeed!"

Once donated to the museum, the Red Dragonfly can be found flying near the waterfall in the upper section of the main bug exhibit with the Darner Dragonfly and the Damselfly. 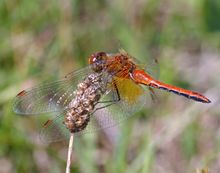 The red dragonfly featured in Animal Crossing is most likely a male specimen of Sympetrum flaveolum, colloquially known as the yellow-winged darter. The yelllow-winged darter can grow to be 32-37 mm long, and can be found through the southern half of Great Britain (though not exactly established there), parts of southern Europe, and in central and northern China. Only the males sport the bright red coloration seen in Animal Crossing — females are a golden brown. The species can breed only with stagnant water, such as in peat bogs and still river backwaters. It can be difficult to tell apart the yellow-winged darter from other dragonflies, especially in female specimens.