A Rice Grasshopper (イナゴ, Inago) is an insect that appears first in Animal Crossing: New Leaf. Similar to other grasshoppers, it appears on the ground, however, it can be told by making a distinct rattling noise. It is around from August until November. It can be sold for 400 Bells.

"I caught a rice grasshopper! I've been looking for a gluten-free alternative..."

As with all insects in the Animal Crossing series, Rice Grasshoppers can be donated to the Museum and information about it can be found in the bug exhibit.

Upon donation to the museum, the Rice Grasshopper can be found on the right side of the first room of the Insect section of the museum.

"Rice grasshoppers are typically known as pests that eat farmers' crops, making them undesirable. But they are also edible, and boiling them in soy sauce is a typical way to prepare them in certain regions. While they are generally green, their shells will turn a darker color when heavily crowded in groups." 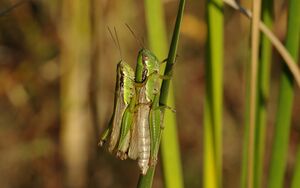 A pair of rice grasshoppers

The Oxya yezoensis is a pest from Japan that feeds on rice plants in the paddies. It became a source of protein and calcium in inland areas of what is now known as Nagano Prefecture and was cooked in a variety of ways including skewered over a fire, or cooked with soy sauce and sugar. Eating these bugs was especially common after World War II due to food shortages and is depicted in the manga "Barefoot Gen." Inland Japan never sees natural swarms of these grasshoppers due to geological conditions.