"I caught a common dragonfly! I love the way they zoom around..."

The White-Tailed Skimmer was added to Animal Crossing: Pocket Camp in version 4.2.1c.

Like all fish and insects in Animal Crossing, the Common Dragonfly can be donated to the museum by talking to Blathers, the curator. He will tell the player some information about it when they donate it.

"<Player>, have you ever peered closely into a dragonfly's eyes? Blech! Ghastly, really. Hooo... But I digress..." 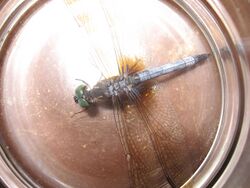 The orthetrum albistylum, commonly known as the white-tailed skimmer, is a species of dragonfly found in Europe, China, and Japan.