"Yes! I caught a flat stag beetle! I have to celebrate! I know! I'll throw a flat-stag party!"

"They're called beetles, wot? The lugs of the insect world. Insects with armor plating their backs, you know. Their armor, it...opens up, revealing wings. Featherless wings. Which they use to fly! It's really quite unnatural. Then, there's that thin, membrane-like covering where their heads connect to their bodies. Most foul! Hooo... But I digress...!"

"When picking up a stag beetle, I would advise you to grab it on its back side. If your finger got stuck in the brute's pinchers, you'd surely regret it, wot wot!" 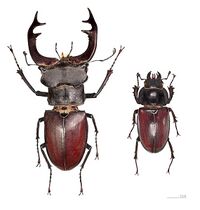