"I caught a violin beetle! And the world's tiniest violin plays a sad song."

"I caught a violin beetle! But how do I tune it?"

"I caught a violin beetle! Apparently I'm as fit as a fiddle!"

As with all insects in the Animal Crossing series, the Violin Beetle can be donated to the museum followed by a small talk by Blathers.

After the player has donated a Violin Beetle to the museum, Blathers will say this:

"I've heard this bug got is name because its body resembles a violin... I'm not so sure though. All slick and black and shiny... If you were to ask me, it looks rather more like an awful locust..."

The Violin Beetle can be found on the tree stump, located on the middle level of the insect section.

Upon being donated, the beetle can be found in the left-hand back room of the bug exhibit, sharing a large tree stump with the Longhorn Beetle. The exhibit has this to say about the Violin Beetle:

"As the name indicates, these bugs resemble violins. They're very thin and roughly five mm thick. They stay on top of fungi on trees and prey upon small bugs that happen by. When predators come near, violin beetles emit a noxious fluid to protect themselves. The fluid is toxic and can be painful if it touches your hands or eyes, so be careful!""

"The violin beetle gets its name from its shape. That is, SOME think it resembles the stringed instrument. If you ask me, this is an insult to violins! With its flat body and small head, the violin beetle looks like nothing but a repulsive bug, plain and simple. In fact it is so repulsive, it oozes a foul liquid when frightened! Ugh! This insect strikes a sour note indeed."

When donated, the violin beetle can be found in the main room of the bug exhibit, on a tree stump to the left of the northernmost bridge. 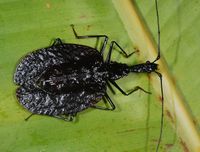 According to the in-game encyclopedia, "These resemble violins-- hence the name. They are so thin, they fit in wood gaps."

Mormolyce phyllodes, commonly known as the violin beetle, is a species of ground beetles in the subfamily Lebiinae. These beetles possess a flat leaf-shaped, shiny black or brown body with distinctive violin-shaped translucent elytra (hence the common name). This characteristic mimicry protects them against predators, while their flat shaped body allow them to dwell in soil cracks or under the bark and leaves of trees.

Both adults and larvae are predators, feeding on insect larvae. For defense purposes, they secrete the poisonous butyric acid.