"I caught a longhorn beetle! And I didn't even need a lasso! (Did I really just say that?)"

"I caught a longhorn beetle! Don't chew through my net!"

"I caught a longhorn beetle! It was a long time comin'!"

"I caught a longhorn beetle! I had to steer it toward my net!"

"I caught a citrus long-horned beetle! Orange you happy for me?"

As with all insects in the Animal Crossing series, the citrus long-horned beetle can be donated to the museum followed by a small talk by Blathers, the curator.

"Hoo my! Those sharpish mandibles... truly frightening. Honestly, what could be more off-putting than these? And the antennae! Why on earth are they so very thick? Blech! Most objectionable! In a word: bad!"

"Hoo, I say! Be sure to keep your fingers away from that savage maw! And what ostentatious antennae! I mean, really! Blech! Such foulness... Hoo... But I digress..."

After Blathers reluctantly accepts the longhorn beetle, it can be found on the third tree from the right in the second room of the bug exhibit. It sits placidly on its tree, but does shuffle about on the spot quite a bit.

"The multiple varieties and colorful body types of the longhorn beetle make it popular with collectors. It stands toe-to-toe with the dynastid and stag beetles in its popularity with children, eh wot? But those long, skinny legs and long antennae drop it right off this owl's list! How utterly revolting..."

After donation, it can be found on the second tier of the insect section of the museum, in the middle enclosure containing two trees and a tree stump, on the tree stump with the violin beetle. This enclosure also contains the walking leaf and oak silk moth, to name a few others.

Upon donation, it can be found on the large tree stump in the upper left room of the insect exhibit. The information board has this to say about the longhorn beetle:

"Longhorn beetles have very strong mandibles, and both adult and larval forms eat through the bark of trees. They have extremely long antennae that are sometimes even longer than their bodies. The adults have such strong mandibles that they can bite off people's hair. And keep in mind that hair isn't the only thing they'll bite, so be careful when handling them!"

"The citrus long-horned beetle is a putrid pest and a grave threat to trees. Hoo! It's true! Adults possess powerful jaws and use them to chomp through hardwood and plant fibers with ease. The little larvae are no better, boring bullet-like holes into innocent trees with gusto—citrus trees especially. Voracious and vile, indeed!"

Once donated to the museum, the citrus long-horned beetle can be found on a tree stump next to the rosalia batesi beetle and the jewel beetle. 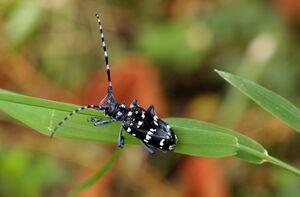 The genus is the Anoplophora of the longhorn, the Cerambycidae is the family. Native to China, the Asian long-horned beetle causes severe damage to America's trees. The beetle can launch itself as far as 400 meters, in search for a tree to lay eggs in. As they grow up, they wiggle out of trees, eating sap, laying waste, and making deep, wide holes.

Each female citrus long-horned beetle can make up to 200 eggs after mating, and each egg is separately deposited in tree bark. After the beetle larvae hatches, it chews into the tree, forming a tunnel that is then used as a place for beetle pupation (the process of growing from larvae to adult). From egg-laying to pupation and adult emergence can take twelve to eighteen months.