"I caught a jewel beetle! Look at that sparkle!" —Wild World

"I caught a jewel beetle! A real diamond in the rough!" —New Leaf

The Jewel Beetle (タマムシ, Tamamushi) is a small, greenish insect found on the front of trees in all games up to and including New Leaf, but on tree stumps in New Horizons. It appears all day in New Horizons, but could only be found in the morning and early afternoon in the previous games.

As with all insects in the Animal Crossing series, the Jewel Beetle can be donated to the museum by talking to Blathers, who will give a small speech on it.

Blathers speech is as follows:

"I am a nocturnal creature, so this color is rather a bit too bright for me...There's also the fact that I abhor bugs to consider. Blech! Loathsome thing..."

Blathers speech is as follows:

"The Japanese name for the jewel beetle inspired their word for iridescence. Makes sense, I suppose... Since the beetles keep their color after death, it's said their bodies were worn as jewelry long ago. Do you suppose they left the legs and antennae on the bodies when they wore them? ...Blech."

The Jewel Beetle can be found in the top-most section of the museum, to the far left, on the same tree as the Rainbow Stag (the tree closest to the light on that side).

"Jewel beetles are very pretty insects that show a red line on their green bodies when refracting light. They're so pretty that it's believed people used them for craftwork a long time ago. Their shiny wings are easy to notice, but birds have a hard time targeting them. This is because birds aren't very good at seeing things that change color in different lights."

"The green shimmer of the jewel beetle's wings is nothing short of nauseating...yes? No? Well, so says you. Though...jewel beetles were once prized by collectors who turned their iridescent wings into pretty jewelry. Why anyone would want to wear bug parts on their body is beyond me. Fashion foul indeed." 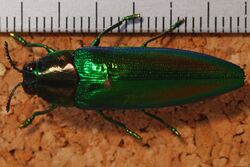 The beetle (Chrysochroa fulgidissima) is a buprestid native to Japan and is known as Tamamushi in Japanese. Due to its iridescence, the true color of the bug can be difficult to determine, which is the basis of the expression tamamushi-iro in Japanese. It is used to refer to vague or unclear statements given by a politician. Metallic colors in beetles may not be due to pigments but rather how the structure of surface of the exoskeleton refracts light. These features have on rare occasions been preserved in fossils, some as old as 50 million years, as explained here.